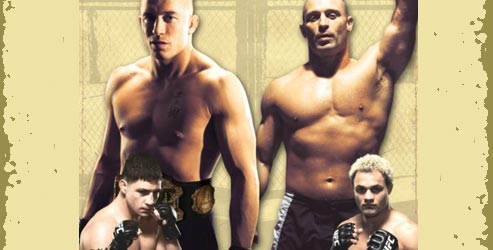 We're just a few hours away from the televised portion of the UFC 69 pay-per-view (PPV) event from the Toyota Center in Houston, Texas.

Fortunately, one of our loyal readers -- DrubySunshine -- has volunteered to provide blow-by-blow, round-by-round coverage of tonight's show.

He's more than just a loyal reader ... he's also a good friend. Therefore, I feel confident letting him take the reigns this evening as we head into uncharted waters.

Rest assured, I'll be on standy by and looking over his shoulder just in case he breaks something.

If it is successful and something readers enjoy, I see no problem continuing the feature indefinitely.

We'll begin posting undercard quick results leading up to the telecast. These are potential spoilers, therefore, don't click the link below if you don't want to see the results.

Consider that a warning.

Feel free to share your thoughts on the fights as they happen in the comments section, as well as let us know if there is anything we can do better throughout the night.

I'll be back once the show wraps (and check-in periodically, of course) to recap the fights and provide some final thoughts on the main card action.

Hey guys how goes it, Drubysunshine here ready to give you quick hitting summaries of each rd. I'm glad to be here representing UFCMANIA and excited to spend the night with you guys on what we hope will be a great night of fights.

Big announcement from UFC President Dana White: In the Octagon with Rogan, White introduces Big Nog as a UFC heavyweight fighter. I just got a hard on.

"Pretty soon I wish to fight for the title," says Minotauro in a brief interview with Rogan.

The UFC keeps getting better.

Round 1: St Pierre looks calm and confident. Serra is attacking the body with a punch. St Pierre is keeping some distance. A quick exchange between the two. St Pierre has a HUGE size advantage as we all know. Serra is landing some nice body shots however. Serra throws a nice flurry. Serra lands a great right! St Pierre unleashed 2 kicks one to the head followed up by one to the body. Serra still looks calm. Serra Stuns St Pierre with a flurry!! OMG!!OMG!! OMG!! OMG!!! Serra knocks out St Pierre!!! Serra Knocks out St Piere!!!

Result: SERRA DEFEATS ST. PIERRE VIA KNOCKOUT IN FIRST ROUND!!!!

Round 1: Both guys are feeling each other out. Koz throws a high kick. Diego is keeping his distance. Straight right by Koz. Another high kick by Koz. Koz is talking smack. Koz's hands are down and chin is out which doesn't seem wise. The pace is really slow. Koz lands a stiff right! It didn't phase Diego one bit. The boo birds are out. Both fighters seem reluctant to engage each other. Koz shoots and lands a takedown with 20 sec's left! Diego reverses!! The bell rings. Only one takedown attempted by Koz and he got it. I give Koz the rd, but only b/c he was more active. Overall is was a slow slow rd.

Round 2: Another stiff right by Koz. This fight is real slow. Both guys are just dancing around each other. Koz lands a big right! High kick by koz followed by a body kick! Koz is working more kicks. Koz lands another HUGE right cross! Both guys exchange flurries. Another slow and boring rd. Both guys seem like their shadow boxing. Once again I give the rd to Koz due to the fact that he was more active 10-9. Right now it looks like Diego just can't figure Koz out.

Round 3: Koz again with another right. This looks like a boxing match, and not a good one. The boo birds are still out, and rightfully so neither guy is even trying anything. Theres really no action to report, Koz hasn't tried a takedown since his first and Diego doesn't look like he wants to engage. Koz opens up with another flurry. This looks like a horrible sparring match. Koz throws some high kicks but misses. WOW! That was one of the worst fights ive seen in awhile. There was one takedown by Koz and a large amount of dancing and shadow boxing. All the fans are boo'n and for good reason. Their TUF fight was 10 times better than this one and it was only 2 rds. I give the last rd to Koz 10-9 only because he was slightly more active. This was a joke of a fight, both guys should be embarrassed.

Round 1: Both fighters exchange punches. Huerta gets a quick takedown but back to the feet. Another great flurry Huerta lands a nice high kick. Huerta is on top in Garcia's full mount while Garcia works and armbar. Huerta takes his back. Hes trying to sink a choke and Garcia escapes and gets it to the feet. Garcia gets slammed but has a guillotine. Huerta is on top in Garcia's mount and is raining punches. Garcia gets it to the feet again. WOW. Both fighters are having great exchanges with punches. Huerta is raining more punches from side mount. Garcia rolls into a reverse and is in Huerta's guard! Garcia rains some punches. Huerta has a cut above his right eye. That was a great rd of action, Huerta gets it 10-9. Garcia says "he has no power" first thing when he gets to his corner.

Round 2: Both guys are throwing bombs. Huerta gets a take down and drops elbows from side mount. Huerta is just overpowering him from the top, but Garcia scrambles and lands a great knee. Garcia has some balls on him. This is a SLUGFEST!! Both guys are toe to toe street fight style. Huerta gets a takedown right into full mount and Garcia looks gassed. Huerta is dropping more bows from Garcia's full guard. Garcia's gets up and lands a HUGE right! WOW! Toe to toe again just throwing BOMBS at each other. Huerta great another takedown. Hes in half mount. Huerta is raining punches. Garcia does a great job form the bottom. The fans are loving it. This is a great fight! Garcia looses this rd 10-9 again, but he is tough as nails hes really leaving it all out there. Great Action!

Round 3: Garcia is still smiling. He has been the whole fight. You gotta love these guys! Another crazy excahnge of punches. Huerta gets the takedown. Huerta is working a Kimura from side mount. Huerta is working from side mount looking for anything he can get. Garcia is great on the bottom. This fight is non stop action. Garcia reverses and takes Huerta's back!!! Huerta reveres! hes dropping BOMBS! Garcia is hurt!! WOW. Garcia weathers the storm AGAIN, and yes he is still smiling! The dude is crazy! Huerta is still dropping punches from side mount. WOW! WOW! WOW! So far fight of the night. I give the rd to Huerta 10-9, but i don't think words can explain the set of balls Garcia has. He took a beating and kept throwing. One of the best fights I've seen at 155 since its inception in the UFC. Outstanding pace.

Round 1: Swick is working some leg kicks to try and set up his distancing. Okami looks very calm and confident and he has and obvious size advantage. Okami landed a nice overhand right. Both fighters exchange head kicks. Okami with a takedown from the clinch. Okami is working some elbows from side control and its obvious that hes much stronger than Swick. Okami closes out the round by almost locking in a Kimura from side control. Okami dominated the rd. 10-9 Okami. First thing Swick says to his corner at the end of the rd is "Man hes strong". Swick does not look confident.

Round 2: Swick starts off keeping his distance. Its obvious hes afraid of Okami's strength. Okami is pushing forward. Okami with a leg sweep take down falling into Swick's guard. Swick looks gassed, the ref stands em up. Okami is steadily working his jab to set up his takedown. Swick has a great flurry landing a solid left, but Okami calms the storm by locking him up in clinch and takes him down back into Swick's full guard. Ref stands em up again. Swick lands a great flurry of punches 10 more seconds in the rd and it could have been over, he had Okami rocked. Okami goes for the legs and gets saved by the bell. Swick possibly stole the round with the last-minute flurry!

Round 3: Okami goes for a takedown Swick sprawls out. Swick lands another flurry of punches but Okami takes him down and takes full mount. Okami is raining punches! Swick looks in trouble big time!! Swick gives the back, then comes back to the front. This is close to being stopped! Okami looks gassed but is still dominating. Mario Yamisaki keeps threating to stop it. Swick with a great reversal!! Hes in Okami's full guard. Swick is in half guard, but it looks like too little too late. Both fighters are gassed at the end of the rd. Okami looks like he took this last rd with ease due to his dominant full mount. Okami gets the rd 10-9 in what should be a victory for him.

Round 1: Grove and Belcher started off with a great pace. Belcher had a quick take down which was reversed by Grove. The rest of the round Grove was dominating from the clinch. Grove landed 3 or 4 vicious knees to the ribs and some great front kicks. Got to give the rd to Grove 10-9 and Belcher looks like he might have hurt his ribs on one of those knees from the clinch.

Round 2: Grove softens up Belcher with some knees and then lands a VICIOUS elbow to knock him down and open up a bad gash on his head. Grove rained down some more elbows then Belcher got it to the feet but it might not have been wise. Grove lands an array of elbows and punches followed up by a Tito-esque slam. Belcher got up again, Grove continued to rain elbows then knocks him down once again. Grove locked in a front choke and put Belcher to sleep. Grove looked amazing, his striking was ridiculously sharp and it seemed only a matter of time before it was stopped due to strikes, however the choke gets the job done. Belcher is asleep! If this fight is indication of Kendall Groves overall skill then his future is bright this was one of the best overall performances Ive seen in awhile.

Result: Grove defeats Belcher via submission (choke) in round two.