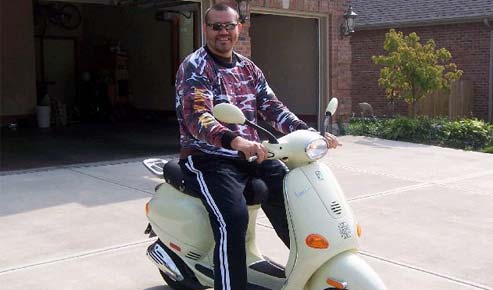 Deep down I seriously have no problem with UFC Heavyweight Champion Tim Sylvia.

I'm not sure what makes this picture so special.

Is it the purple camo shirt and the adidas wind pants combo? Or, the the cream-colored Vespa he's proudly displaying?

What does matter is that Sylvia continues to roll inside the Octagon without much respect outside of it.

Here's a recent snip from Dana White on the issue:

"I think it's the way Tim represents himself sometimes. Obviously when you're flipping fans off, you're not going to have many of them."

I'm not so sure black bear hunts and grasshoppers appeal to too many fans, either.

At any rate, if Sylvia takes out Randy Couture this weekend in impressive fashion, I'm curious to know if he can win back some support.

Or, has the public perception of Sylvia during the last year or so in the eyes of UFC and MMA fans caused irreparable damage to his reputation?

I guess only time will tell.

Even though posts like these certainly don't help his cause ... Neither will beating up the beloved Couture, will it?