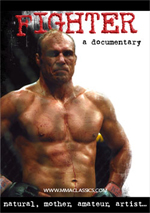 Randy Couture and "a plethora of mixed martial arts (MMA) fighters and celebrities" will gather at the Drexel Gateway Theater in Columbus on Friday, March 2, for the Ohio premiere of, "Fighter, a documentary."

Here's a snip about the film from MMAClassics.com:

"'FIGHTER, a documentary', looks back to capture a slice of sports history as Randy "The Natural" Couture chases his first Ultimate Fighting World Championship belt. The film documents the early stages of MMA in the U.S. with some scenes dating as far back as the early 90's and "takes you deep into the world of Couture... a man who is now considered the personification of everything good about this sport."

Of course, the following day, March 3, Couture will return to the Octagon after a year-long layoff to face UFC Heavyweight Champion Tim Sylvia at UFC 68 at the nearby Nationwide Arena.

Fans are encouraged to attend the screening at the Drexel Gateway Theater at 7 p.m. The documentary will be playing all weekend at the Theater, however, I'm fairly confident this will be the only chance to see the documentary and meet Couture in the process.

Check it out if you're in town.