Dana White: ‘I'm not done yet'

Share All sharing options for: Dana White: ‘I'm not done yet' 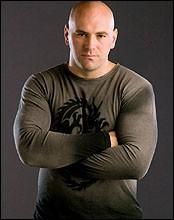 The Brazilian will face former UFC heavyweight champion Andrei Arlovski in his Octagon debut on April 21.

In addition, according to White, there are similar announcements on the horizon.

"PRIDE is in deep trouble. We've snatched away half their guys and I'm not done yet."

Here are some other top-level items from the clip:

Check out the article for more details — it's loaded with good stuff.