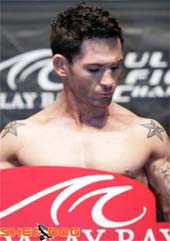 It is a somewhat controversial fight because the Huerta knee that dropped Halverson has been described by many, including Halverson, as illegal.

And, according to an interview with AdCombat.com, Halverson reveals that the man in charge of the Octagon for the bout — Yves Lavigne — called it an illegal knee inside the cage as soon as it happened.

Here's a snip from Halverson:

"... the knee hit my jaw, right by my ear. It didn't put me out. I did hear the ref say 'illegal knee'. Thinking I was going to get a stand up, I didn't do shit. That is my fault. Then, I felt Roger on my back, and I knew I was in trouble, so I covered up. When the ref stopped the fight I complained that I was hit in the face (by his knee) when I was grounded. The ref said , 'I know, I know- stay there!' Then, when the fight was declared over I was pissed. Now, in hindsight, if I would have known the fight would have been stopped I would have taken my chances on a scramble and risked the choke. I could have at least fought that. But again, I didn't do shit because when I heard the ref say 'illegal knee', I thought I was getting a stand up. I do not think Roger Huerta did that intentionally. He is not a dirty fighter. I think I was in a bad spot and he timed the knee to catch me on my way up. Another second and I would have been off my knees."

According to the interview, Halverson and his manager will look into filing an appeal on the ruling with hopes of getting the drama "straightened out shortly."

Since the loss, Halverson reveals that he has not spoken to anyone at the UFC. However, he looks forward to one day redeeming himself in the Octagon.

"I am not going to let this get me down. Roger's part was an accident, my part was a mistake. One that I know never to make again. I hope that I get another chance to prove myself in the UFC. I was in great shape and ready for the fight."

The performance of Halverson — or lack thereof — disappointed most UFC fans. With first fight jitters — on a major pay-per-view card broadcast to hundreds of thousands across the globe — it's understandable for a fighter to make mistakes.

Only time will tell, however, whether or not Halverson's mistake was too big and unforgivable in the eyes of the UFC.