Share All sharing options for: Klaudija FilipoviÃ"â€¡: 'Mirko has promised he will retirein two years' 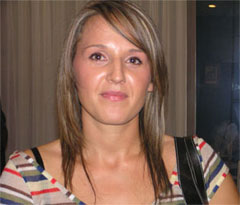 That's the recent headline on Croatian news site Index.hr, which was translated thanks to one of our loyal readers, Loken.

If Mirko "Cro Cop" Filipovic's promise to his wife is true, the heavyweight superstar would call it a career when his two-year, six fight contract with the UFC is satisfied.

This isn't the first time that "Cro Cop" and "retirement" have been mentioned in the same space.

There have long been rumors that the PRIDE FC 2006 Open Weight Grand Prix tournament champion was considering retirement. Especially, in the wake of his loss to Mark Hunt in 2005.

Fortunately, these were just rumors.

At any rate, I just want to pass along the news. Hopefully, the 32-year-old will reconsider later on down the line -- a possibilty his wife isn't denying.

Here's a translation of the entire article:

Wife our MMA master Klaudia FilipoviÃ"â€¡ in discussion with Index has given her comments of his husband fight and future plans.

Klaudia always watches her husband's fights live, because she says, she always wants to know what has happened.

"Of course I am happy. Mirko has won, and besides that he didn't get beaten too much, and than I am happiest. I always watch his fights live because simply I have to immediately know how he did." – thinks wife of Mirko FilipoviÃ"â€¡.

I never let my son to watch Mirko's fight, because clearly he is too young but this fight was exception.

"I must admit that he never watches Mirko's fights, but this time I have made an exception so he did watch the recording. I thought the fight wasn't too ugly. He is still young so there is time for it" – said Mrs. FilipoviÃ"â€¡

And last Klaudia FilipoviÃ"â€¡ has added: "Mirko has promised to me that he will stop fighting in two years. I sincerely hope for it, but you know how old saying goes: promises aren't always kept, and only fools should take them as definite.