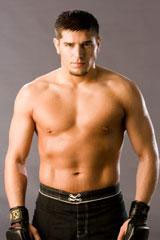 Even with five fights remaining on his UFC contract, the stakes are high for middleweight Patrick Cote (8-4) tomorrow night against Scott Smith (10-2) at UFC 67.

A win, and Cote will most likely live to fight another fight in the Octagon. A loss, and he can probably kiss those remaining five fights goodbye.

In an interview with Neil Davidson from GlobeandMail.com today, Cote understands full well the importance of this bout in regard to his future with the UFC.

Here's a snip from Cote:

"Now it's my time to shine. It's maybe my last chance to prove I have a place here. I will fight like it's the last fight of my life. I had some bad luck before in the past."

I guess that might be somewhat accurate, considering Ross Pointon (4-8) still gets fights.

Not the greatest comparison, I know, but I wouldn't bet the farm on him sticking around too long if he loses again.