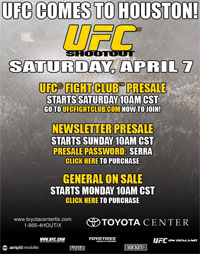 I just received news that UFC Fight Club members will be allowed to purchase tickets for UFC 69: "Shootout" in Houston, Texas, during an exclusive presale tomorrow that starts at 10 a.m. CST.

The event, which takes place on April 7 at the Toyota Center, is the first UFC show in the Lone Star State. UFC Welterweight Champion Georges St. Pierre is scheduled to defend his title against The Ultimate Fighter (TUF) 4 champion Matt Serra in the main event.

In addition, another 170-pound showdown between Diego Sanchez and Josh Koscheck is slated for that evening -- a fight that should have major implications on the division. And, last but not least, Texas native Mike Swick will make his hometown UFC debut when he takes on fellow middleweight contender Yushin Okami.

If you are not a UFC Fight Club member, newsletter subscribers will have the second crack at tickets the following day, Sunday, February 4 at 10 a.m. The password you will need to enter at Ticketmaster.com is "Serra" (without the quotation marks).

UFC 69 tickets will go on sale to the general public on Monday, February 5 at, you guessed it, 10 a.m. CST.

Seats for the UFC "Shootout" will most likely go fast. If for whatever reason you wait until the last minute -- and miss out on tickets -- don't forget there are usually tickets available at StubHub.com leading right up until showtime.