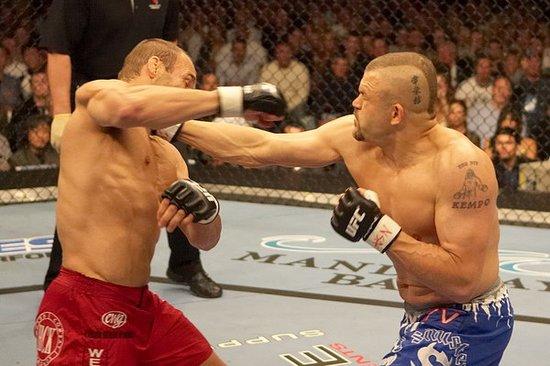 At 6'2" tall and weighing in at more than 205 pounds (except on the eves of fights), UFC Light Heavyweight Champion Chuck Liddell is an imposing figure.

Add in the goatee, Mohawk, and tattoos and, well, you've got yourself a bonafide badass.

We've been getting more and more emails lately from UFC fans, which is customary with a big event like UFC 66 coming up on December 30.

Strangely, we received several emails over the weekend about the tattoo on the left side of Chuck Liddell's head. Specifically, what it means and/or represents.

So, we did a little digging to try and shed some light on origins of the "Iceman's" cranium ink.

Chuck began his martial arts career at age 12 with a style of karate known as Koei-Kan. Its origins can be traced back to China, Okinawa and Japan, but Koei-Kan was first introduced to the United States in 1954.

Koei-Kan aims to cultivate oneself fully to make the greatest use of one's life; to study the science, art and philosophy of Budo; and to gain mental and spiritual balance.

Students are taught to build a foundation of skill through calisthenics, technique, forms, technique application and strategy. Full contact and weapons techniques are practiced as the student progresses. Academic components are taught in conjunction with physical training.

Techniques and their applications, including punching, kicking, dodging, striking, throwing, grappling, reverse joint techniques and choking, are integrated into the student's curriculum by belt rank and physical and mental ability.

Academics are integrated throughout training to develop a student's full potential in the art. Aspects include philosophical, medical, cultural and historical components; written exams are included in rank exams. Advanced students write a paper that requires a working knowledge of the art, reflection, experimentation and research.

So, what the hell does all that have to do with Chuck's tattoo?

The Kanji – Chinese characters used in Japanese form of writing – lettering on his scalp means Koei-Kan. And, in English, Koei-Kan translates to peace and prosperity.

Therefore, it's a tribute to his roots as a mixed martial artist.

And, quite a contradiction when you consider his line of work.