Jon Fitch making a name for himself in the UFC

Share All sharing options for: Jon Fitch making a name for himself in the UFC 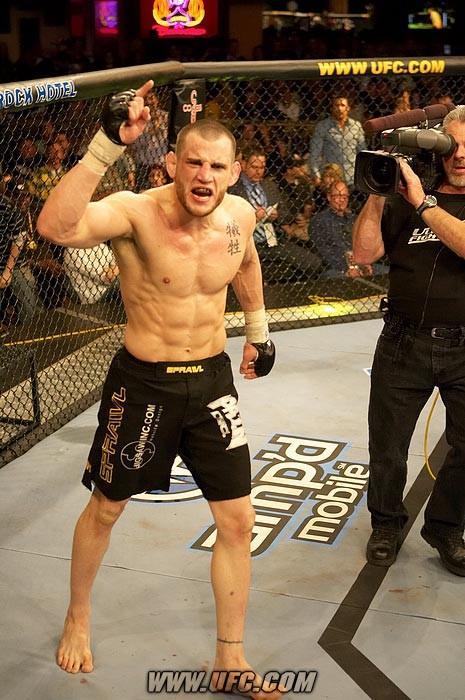 The Vallejo Times Herald recently published a great article on UFC welterweight Jon Fitch, which gives some nice background on his long road to being one of the premier 170 pounders in mixed martial arts.

Jon Fitch looks the look and walks the walk.

Training? Three times a day with the occasional Sunday rest. Nutrition? A steady diet of brown rice, fresh fish and eggs. Education? He soaks up the teachings of mixed martial arts from coaches and trainers, using his background as a wrestler as a gateway to judo, jiu-jitsu, Muay Thai and fighting styles most Americans can't pronounce.

And because of his willingness to give himself up for a sport that can look like a glorified street brawl, Jon Fitch's name is starting to ring a bell.

Fitch recently defeated Kuniyoshi Hironaka at UFC 64: "Unstoppable" via unanimous decision. And, he looked sharp doing it -- all you had to do was listen to the praise heaped on him by ringside announcer and UFC legend Randy Couture.

He boasts a perfect 4-0 record in the Octagon, with impressive victories over tough opponents such as Brock Larson, Josh Burkman and Thiago Alves. His performance on October 10, however, was eye-opening, especially for the UFC fans who had never heard of him or had never seen him fight (it was his first televised bout).

Make no mistake, the 28-year-old former University of Purdue wrestling captain is a force to be reckoned with in the welterweight division. And if he continues to take care of business inside the cage, Fitch will get his shot at the title very soon.