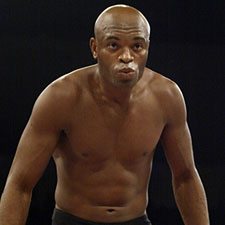 "The Spider" put on a Muay Thai clinic, tossing the physically larger Franklin around the Octagon like a rag doll. And for all the talk about the Brazilian's freakish punching power and accuracy, Silva broke down Franklin in the clinch with crunching knees to the body and stinging leg kicks to the head.

At the 3:59 mark of the first round, Franklin had all that he could handle, dropping to the canvas in a dazed heap. The technical knockout was only his second career loss and first UFC defeat.

For Silva, the jaw-dropping victory catapults him to the top of the 185-pound mixed martial arts class. If the last two Silva fights are any indication, Dana White is going to have his hands full getting this guy a worthy opponent who can compete.

Right now, he is just adding more footage to his highlight reel.

Sherk sustained a bad cut over his right eye thanks to a Florian elbow, but other than that it was "The Muscle Shark's" night, overpowering the much smaller "Ken-Flo" en route to a decisive victory.

And how about welterweight Jon Fitch?

We've been talking about this kid to everyone who will listen, and last night he showed just why UFCmania is a huge supporter.

There were several times where Fitch had the Japanese product hurt bad, but he hung tough until the end. Make no mistake, we'll see more of Jon Fitch in the future.

This guy has talent.

Here are the rest of the results for UFC: 64 "Unstoppable":

Because of a late back injury, Mike Nickels was forced to withdraw from his light heavyweight bout against Keith Jardine. No replacement fight was scheduled.