Share All sharing options for: UFC may change Marquardt fight at last minute 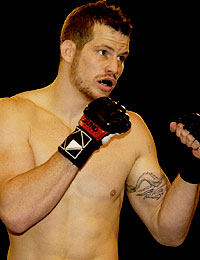 Nathan Marquardt (26-6-1) – one of the UFC's most talented middleweight contenders – will probably have a new opponent at Ultimate Fight Night on October 10, according to MMAWeekly.com.

The Brazilian submission specialist Thales Leites (9-0), who was originally scheduled to fight Marquardt, is having difficulty getting his visa processed and it has jeopardized his chances of competing at the Seminole Hard Rock Hotel & Casino in Hollywood, Fla., next week.

Crafton Wallace (13-2-1) – who lost to Martin Kampmann via rear naked choke in his UFC debut back in August – appears to be the last-minute choice to replace Leites. Wallace has been busy since that defeat, however, winning his last two fights.

The Marquardt-Leites bout was probably the best fight on the Ortiz-Shamrock III: "The Final Conflict" card. If Leites cannot make the fight, it will be disappointing. Wallace does, however, bring a lot of experience into the Octagon.

So, it is what it is. Not ideal, but should be entertaining nonetheless.