Show me the money UFC!

Share All sharing options for: Show me the money UFC! 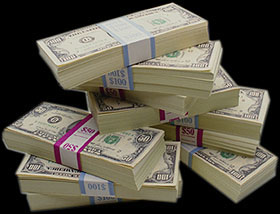 UFC Welterweight Champion Matt Hughes earned a cool $130,000 for his brutal technical knockout of BJ Penn at UFC 63: "Hughes vs. Penn" on September 23, according to an article today from the Canadian Press.

BJ Penn, on the other hand, took home $50,000 for his solid two-round effort (we won't count the third and decisive round).

According to figures supplied by the California State Athletic Commission, the 18 fighters on the card earned a combined $332,000.

For those of you who don't know how it works, UFC fighters are often paid "show" money and "win" money. If a fighter shows up for the fight, he is guaranteed to make a certain amount of money (let's say $5,000). If he wins the fight, he will usually double his payout ($10,000).

Talk about incentive to kick some you know what.

Here are some other notable purses: