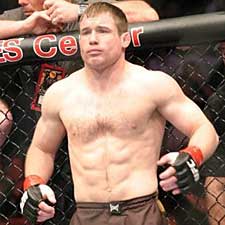 For two rounds last night, BJ Penn looked like he was on his way to his second victory over UFC Welterweight Champion Matt Hughes. But, lightning did not strike twice at the Arrowhead Pond of Anaheim in California.

Matt Hughes scored a huge come from behind technical knockout victory over "The Prodigy" in the third round, bringing his mixed martial arts record to a jaw dropping 42-4 and cementing his legacy as the greatest champ in the history of the Octagon.

Here's a snip from Hughes in the Las Vegas Review-Journal:

"I was close to submitting in the second. Honestly, you know what I did? I said a little prayer.... I'll tell you what: If he had the gas tank to go five rounds, he could have won every round. But I knew his cardio was going to be his weak spot, so when I came back from the first round, even though I knew I lost it badly, I smiled."

From the outset, Penn was indeed the superior fighter. He looked almost possessed, stuffing the takedown attempts of Hughes and clearly setting the tone for the fight. But, that appeared to be his downfall.

Penn had Hughes almost at the brink in the second round. He threw about four submissions at the champ, who was able to weather the storm and suck the energy right out of the challenger.

And when Penn labored out of his corner to start the third round, Hughes was just warming up. He sensed that Penn was still gassed from exerting so much energy in the previous rounds and he pounced.

The result was an impressive non-submission victory from a fighter who has almost exclusively relied on submissions to end fights. Hughes tasted victory for the first time against BJ Penn, and it was most certainly the sweetest victory yet in his storied career.

It's too bad about BJ. He looked awesome early on, making Matt Hughes look like a very ordinary fighter – not something that happens very often if at all.

We can only hope that BJ Penn gets his act together, trains hard, wins a few bouts and earns his rubber match with Matt Hughes.

A fight that Matt Hughes might not be able to win if BJ Penn can live up to his unlimited potential.

Here are the official results for the rest of the evening:

We'll weigh in with a few more thoughts about last night once we can collect ourselves.