On the road with UFC Champ Chuck Liddell

Share All sharing options for: On the road with UFC Champ Chuck Liddell 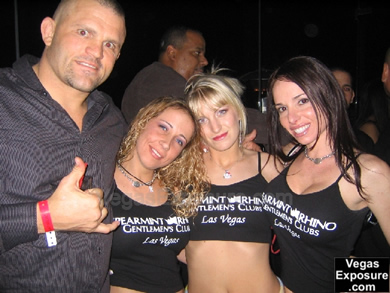 The other day, Carlos Arias from the Orange County Register tagged along with UFC Light Heavyweight Champion Chuck "The Iceman" Liddell during a whirlwind media tour leading up to his title bout against Renato "Babalu" Sobral on August 26 at Mandalay Bay in Las Vegas, Nevada.

The article gives a blow-by-blow account of what an average day in the life of the baddest dude on the planet is like. We get an inside look at of some of his interviews with media outlets such as Playboy and KABC.

It also provides some details on how Chuck became involved in mixed martial arts and how he has worked his way up from the bottom to where he is today. Chuck also discusses his upcoming fight with Babalu, his acting stint on "Blade," his kids, and his hot ass girlfriend Willa Ford.

Liddell's father left the family when he was three years old. His grandfather raised him and supported him in everything he attempted. They used to watch UFC events together and his grandfather would tell him he could knock those guys out. Liddell's grandfather passed away before he made it to the UFC. He never got to see his grandson in the Octagon. Liddell says his father tried to make contact with him after he made it big in the UFC. "I didn't want to have anything to do with him," he says.

Check it out when you have some time ... interesting read.