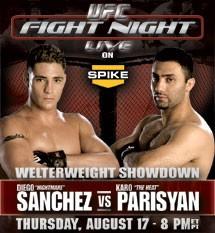 Kalib Starnes has a boo-boo.

No real details of the injury have surfaced. But we're getting the feeling that Starnes and injuries go together like Chuck and XYIENCE.

This match up will mark the UFC debut for both men, who are Muay Thai "bangers."

The following is the latest UFN card, which will air on SpikeTV at 8 p.m. prior to the debut of The Ultimate Fighter (TUF) 4 at 10 p.m: